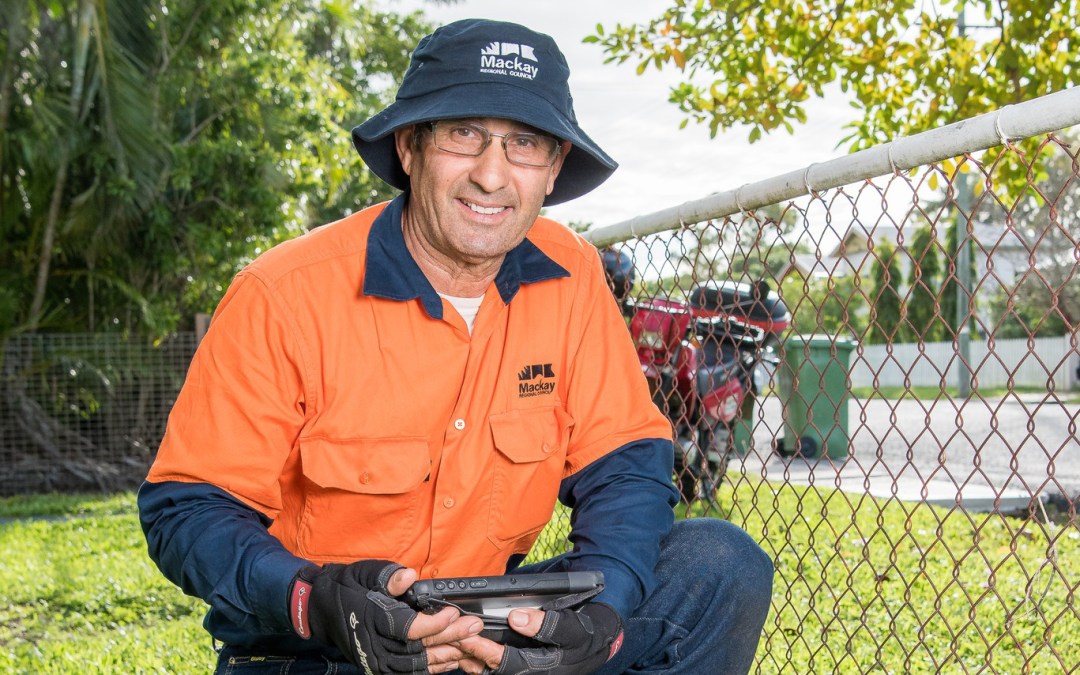 Mackay Regional Council is rolling out their second round of smart water meters after successfully saving money and water over the last ten years. Thanks to its collaboration with Taggle Systems, Mackay has avoided building a new water treatment plant until at least 2048.

During the mid-2000s, the Mackay region of Queensland was experiencing a booming economy and rapid population group. These created increasing pressure on the cost of delivering water and sewerage services. It also created a need for a new water treatment plant in the future. However, such capital investment is significant, and it was hoped that this type of capital investment could be delayed.

Enter Taggle Systems. Mackay Regional Council and Taggle Systems partnered to develop a smart water network with automatic meter readers (AMR) to be rolled out across the council area to collect data.

Andrea Thayer is the Stakeholder and Client Support Officer from Mackay Regional Council. She knows how important it is to engage with the community, look at the impact of providing data to engaged consumers, and what the next step means for Mackay. 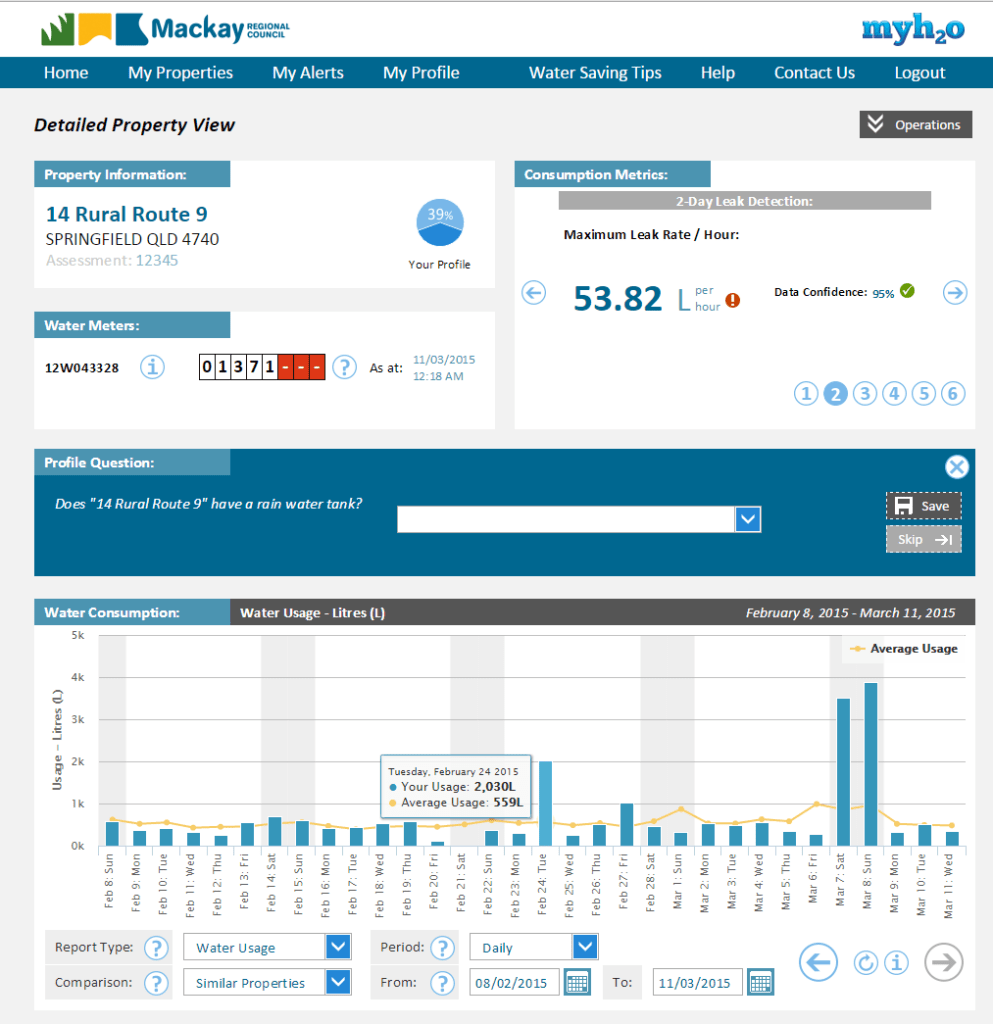 The original goal of the program was to reduce water use. Thayer pointed out that the Council wanted to reduce people’s water consumption.

“Our daily water demand was getting really high. All the evidence indicated that it was mostly outdoor water use. As a result, we did a marketing campaign to educate people about better times of the day to water their lawns. That way, we could encourage people to use less water and still have green grass,” she said.

The next stage of the campaign was to introduce the remote readers and then the public portal where people could access their water consumption. Council installed the MRC-1 and ADC-1 meters and a Low Power Wide Area Network (LPWAN) on every water connection in Mackay. Mackay and Tyeware worked with Taggle to develop an analytical platform called MiWater to understand the data, while customers could access a platform called MyH20.

Another critical point is that the remote readers’ data allowed Mackay to understand their trunk and reticulation network. This knowledge includes non-revenue water and losses by completing water balance calculations at a DMA (District Metered Area) level.

Council found a 12 per cent reduction in per capita residential water consumption following its campaign. That may not seem like much, but about 30 litres per person per day adds to a lot of water.

Getting the community to buy into the program has been a challenge. According to Thayer, those signed up tend to be highly engaged with the program.

“When a large water bill impacts people, they often complain that they have not been told earlier,” Thayer said. “We tell them that if they had signed up to the portal, they would find out within three days instead of the extended period they have experienced. That has driven some sign-ups. We still send notifications about signing up to the portal every month.”

Thayer pointed out that detected leaks are usually on the property owner’s side, not the councils. While it might be confronting for property owners, Mackay contacts them to inform them that these leaks exist. It is part of going above and beyond to build a relationship with the property owners.

“I keep an eye on the portal daily, at least from my end. The portal always tells me the top five water leaks within the regions,” she said. “Some of them could be hospitals or shopping centres, so you ignore them. However, whenever you see a residential customer in the top five leaking a lot of water hourly, I’ll ring them myself. It can be tough trying to convince them that it’s not all the kids showering at the same time or guests visiting. Getting people to understand a leak instead of high consumption can be challenging.”

One of the biggest challenges in this educational battle is helping people understand what a leak is.

“Not all leaks are visible. In Mackay, almost everyone is built on sand. It is much harder to see where there is an obvious leak. A greener patch of grass would be a clear example,” said Thayer. 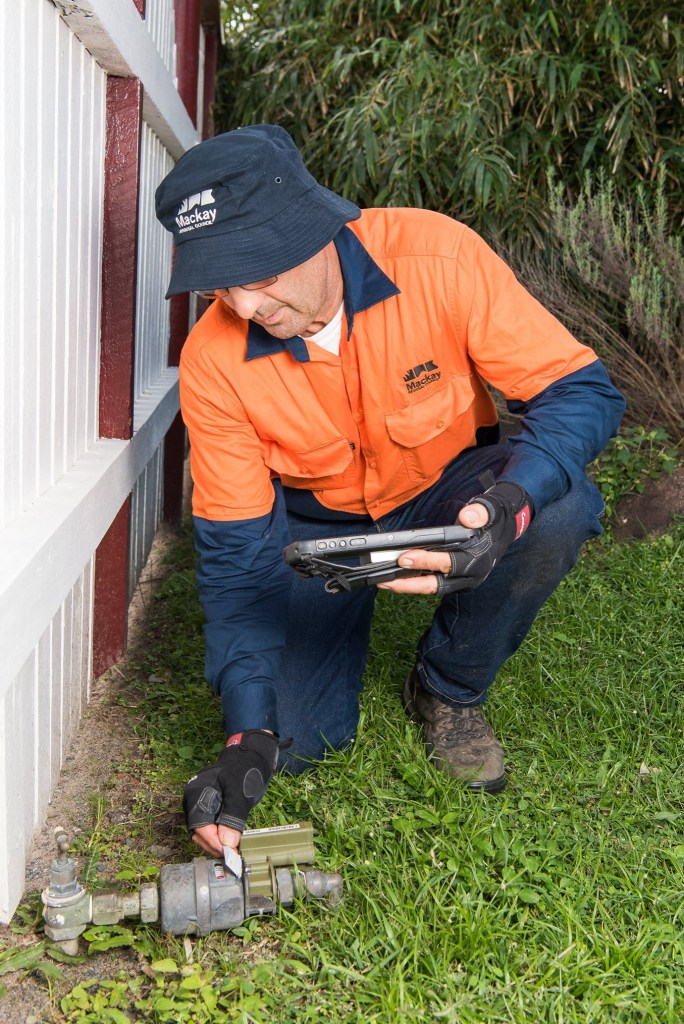 Thayer pointed out that living costs have been combined seamlessly with the new meters and customer portal. People get a monthly consumption report to budget for their water bills. Mackay issues water bills every six months. She noted it was interesting that more than 90 per cent of complaints related to water bills are from people who have not signed up to their portal.

“We provide relief on people’s water bills if they have any leaks. Part of the criteria to receive that relief is signing up for the portal. In that way, they can avoid any future problems. That’s been received extremely well by the community,” she said.

However, some people get upset now that they are not notified as early as expected. Thayer recounted a story of a customer experiencing a massive leak but not responding to the notifications or phone calls.

“We sent him a text message through the system, and within half an hour, he called Council,” she said. “The call centre put him through to me, and he was extremely rude. He was asking what we would do about the leak, and I had to point out that the leak was on his property. It was his responsibility, and Council was trying to save him money.”

Explaining how the data extracted from the meters would affect citizens was tough in the early days. According to Thayer, it is not such an issue since people have developed a relationship between the data they are receiving and what is being absorbed by other utilities.

“Ten years ago, people were slightly sceptical about handing over their data,” she said. “It’s all about people’s mentality at the time, so it has changed a bit. Now that they know what is going on, it’s a lot easier.”

One unexpected element of adding remote readers and the portal was the volume of data people can now access. While it allows them to see their daily consumption, there is a push for more data.

“We did not realise that people always want more,” said Thayer. “As a council, we decided early on not to offer hourly information to customers because that would be too much of an invasion of privacy. We did not want to be seen as a Big Brother organisation watching over the citizens, so we offered daily data. One of our findings was that the more data we provide, the more they want. We are still working out what to do with that.”

Understanding customer needs and the data

Thayer spoke of one customer who complained that they did not receive a notification after leaving a garden hose on for a day and a half. The systems are currently set up to notify someone if there is a constant flow for more than two days. They would receive a notification on the third day. Thayer pointed out that people are constantly pushing for more data and information, which is challenging for Council to deal with.

Having access to all that data has taught Mackay a lot about its water users. Thayer cited an outer suburb that has bigger blocks. They tend to consume more water per capita for outdoor purposes than the rest of the council area. The pumps in that area struggled to keep up with demand, so Council opted to issue a press release that named and shamed specific streets that were using too much water.

“Councillors were not too impressed with this strategy. However, it helped with reducing water consumption,” said Thayer. “The pressure from neighbours, implicit or otherwise, really impacted people. They realised that their actions impacted the whole neighbourhood. While we got in some trouble from the higher-ups, it effectively reduced the stress on the pumps.” 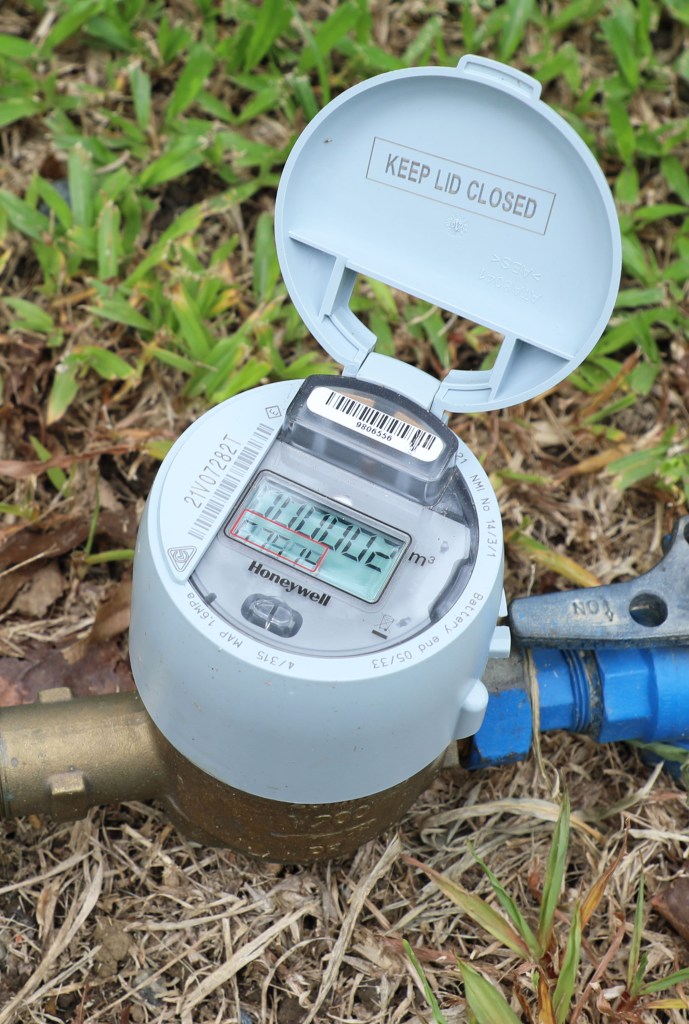 As the devices are now up to ten years of age, Mackay and Taggle are planning the next round of installations. Mackay is the first council in Australia to begin its second round of smart water meter installs after a successful ten years of water savings.

Taggle now has an integrated Honeywell meter available from 20mm for residential properties up to 40mm for apartments and commercial buildings. These robust devices make for easy installation and device management. The add-on telemetry devices will also be used across the region for challenging radio environments or for larger-sized meters.

Beginning round two led to a critical education campaign to explain that while one person’s meter may look different from another, they are still doing the same functions.

“One of the other issues is that we did a massive replacement program ten years ago. We currently have an enormous spike of water meters and remote readers that need replacing. The goal is to spread that out over the next two to three years. That way, we can install them more reasonably.

The new meters will read more accurately than our existing water meters, improving our understanding of usage across the network. This enhanced level of accuracy may increase some customers whose old meters were under-reading or not transmitting usage information correctly,” said Thayer.

Thayer acknowledged an anticipated increase in customer inquiries when the new bills go out. They are not sure what the change in bills will be. However, given that there are meters that have stopped working, some customers will receive accounts representing their actual consumption for the first time in a while.

“When looking at renewal programs, we can pull all this information to understand infrastructure better than we could before,” said Thayer.

Implementing smart water meters and the communication strategy increased water education throughout the region. It has resulted in a reduction in water consumption and increased knowledge around water conservation. There has also been an improvement in relations between customers and Council. The need for a new water treatment plant has now been pushed back to 2048, saving Council capital expenditure in the face of a changing climate. The partnership between Taggle and Council has been beneficial, and both parties hope it will continue to be good for years to come.

This article was first printed in Inside Water Magazine