LPWAN technology extends the reach of SCADA for Sewerage Networks 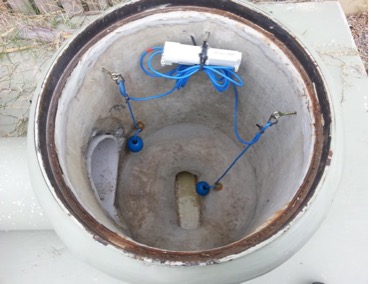 The advent of Low Power Wide Area Networks (LPWAN) over the past few years has prompted a lot of discussion about smart water meters and automatic meter reading (AMR). There have been many papers written, views expressed and positions debated about the benefits of AMR data collected by LPWAN technology. Now, after 7 or 8 years of debate, there’s quite a number of Australia’s water service providers (WSP) that have moved beyond the initial uncertainty and have implemented AMR systems with considerable success. Most of these are using Taggle’s well-proven LPWAN.

With AMR well and truly established, providing visibility on the performance of their water reticulation assets for the first time, attention is now moving to the other reticulation network that draws heavily on councils’ annual operating budgets, the sewerage network. As essential as supplying water might be, managing wastewater is just as important but seldom discussed outside the circle of engineers tasked with maintaining them.

Like their water supply brethren, sewerage engineers have had little or no day-to-day visibility of their in-ground assets prior to the introduction of LPWAN communications. For many, the first indication of a problem is when a concerned resident complains about an overflow from a manhole or worse, a discharge into a creek or waterway. The consequences are often messy and expensive and some require a report, and maybe a hefty fine, to a state environmental protection agency, something to be avoided wherever possible.

So, how can access to a Low Power Wide Area Network help?

Simple, relatively low-cost, battery powered, LPWAN capable sensors installed across the sewerage network can open a new window into its daily behaviour. Let’s look at just a few to see what can be achieved.

Sewer overflow sensors, dual low-tech float switches fitted with LPWAN transmitters, installed in manholes provide early indication of rising levels that can be fed directly into SCADA systems. Alerting operators to potential problems in near real-time, response crews can be mobilised quickly and reportable events avoided. Being low-cost, these sensors can be installed at many more places than more expensive 3G versions, making surveillance of the entire network much more affordable. With data available in DNP3 format, setting them up in most SCADA systems is a breeze.

Add in a number of tipping bucket rain gauges with LPWAN transmitters and the potential savings grow significantly. Having hourly local rainfall data and combining it with rising sewage levels observed across the network provides engineers and operators with essential clues as to the existence of inflow or infiltration. The rate of level rise and timing after heavy rainfall can help identify which of the two problems exists. Rapid level rises suggest inflow whereas slower level rises indicate infiltration as being the culprit. Knowing this can help an engineer decide which type of testing to employ and potentially save hundreds of thousands of dollars on wasted testing services.

Pressure and vacuum sewerage networks often encounter problems when power is lost or a baffle is stuck open. In many cases, a flashing light is used to raise an alert but they’re not always seen immediately and the fault may take some time and effort to locate. By including a low-cost LPWAN transmitter, the alert can be routed to a SCADA system almost instantly. The location is identified and action can be taken immediately. Again, being of such low cost, these devices can be deployed widely providing much greater visibility than before.

Low Power Wide Area Networks Like Taggle Systems’ are now becoming an essential part of enhanced SCADA systems. They provide low-cost communication options for sensors that, previously, were just uneconomical to install. Access to wider data sets afforded by having more sensors deployed provides much clearer context for operators and engineers responsible for the safe and efficient operation of both water and wastewater systems. Decisions can be made based on better information with greater confidence.

This article was published in Utility Magazine August 2018 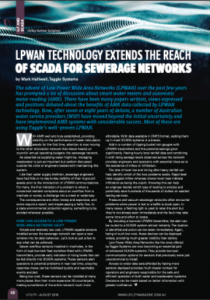